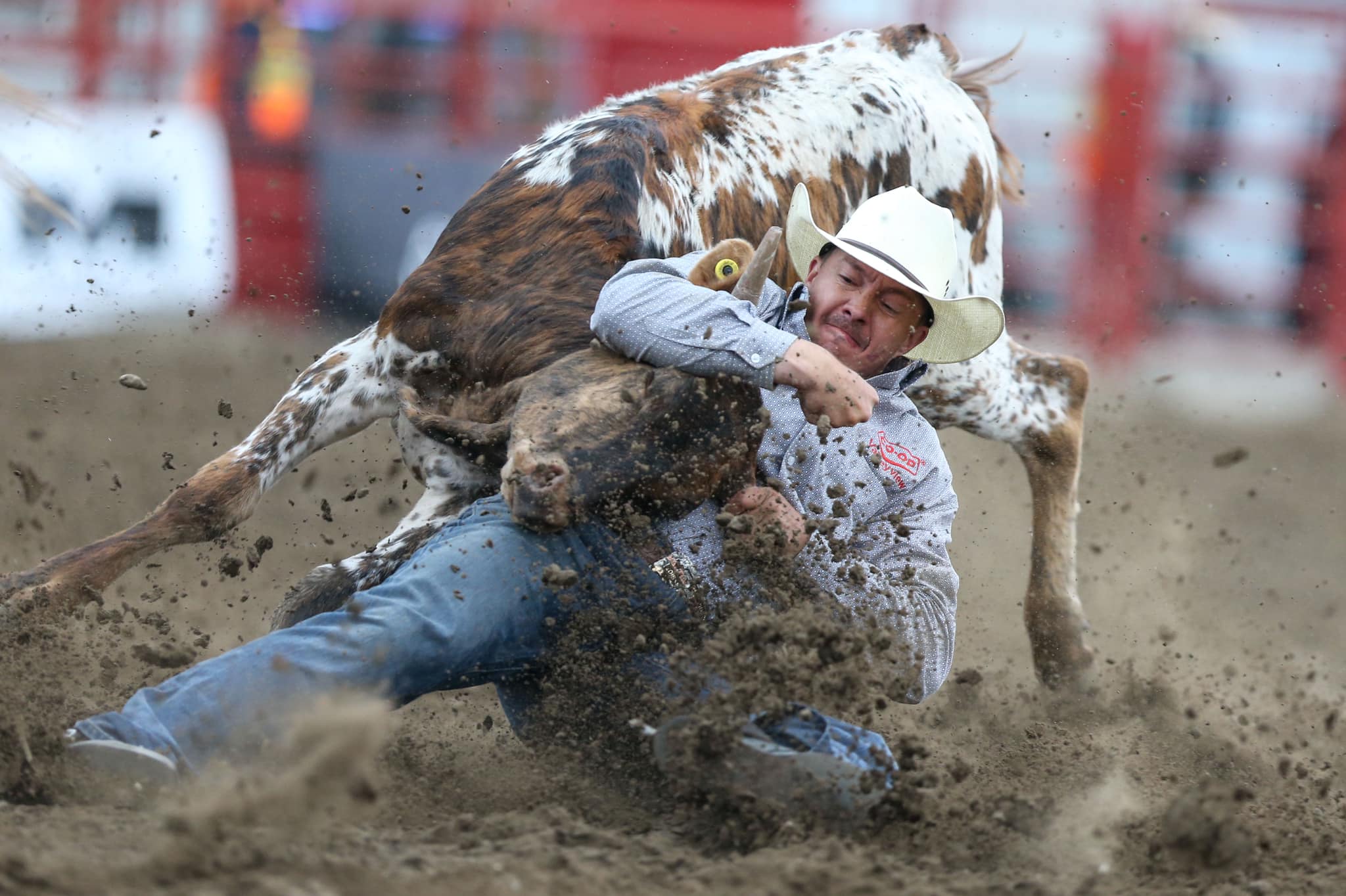 The chute gates cracked open to professional rodeo for the first time in three years at the Ponoka Stampede.

Contestants were awfully glad to be back – roping, wrestling, running and riding for an increased purse of $55,000 in each major event.

Opening night performers made the most of their turn, setting the bar high for those to follow. Like in the saddle bronc riding where a pair of Alberta talents treated fans to a spurring clinic. Wildwood’s Logan Hay teamed up with the C5 horse Kitty Whistle – one he’d wanted for a long time.

“She’s an awesome, awesome horse,” says Hay. “If I could’ve picked one to draw here, that’s the one I would’ve picked!”

“She’s really flashy and she really bucks. She just feels good. You do your thing and she’s gonna do hers, and you’re gonna win.”

Or nearly top the leaderboard.

Hay chalked up 87.75 points, but Layton Green managed to better that by a mere quarter of a point, with his final tally of 88 on Shattered Lunatic. It’s pretty much a hometown show for Green, who grew up not far from Ponoka at Meeting Creek. So his folks and plenty of friends were on hand to catch up with Green,and congratulate him on his great ride.

Both Green and Hay had fathers who also competed at the Ponoka Stampede in saddle bronc riding, so theyare carrying on the family legacy in the sport. Hay’sfirst appearance in the open bronc riding at Ponoka was back in 2019, where he missed the short round by half a point, so even though he’s sitting second, he’s in much better shape this year to be back for a chance for more Ponoka money.

“I remember playing under the stands here watching my Dad rodeo, then came up through the novice. It’s definitely one of my favorite rodeos of the year and I’m so happy to be back. It’s a rank atmosphere. I love it here.”

It was a first trip to Ponoka for the 2020 World Champion Tie-Down roper. But it won’t be his last, since Shad Mayfield crushed the opening round with an 8.5 second run, to go along with his solid 9.4 second run in the morning slack performance. With a 17.9 second tally on two runs, he’s got a more than six second cushion on the rest of the field.

“It’s a little different setup,” explains Mayfield, referring to the famous ‘long score’ at Ponoka, which means the timed event contestants run down the alley a ways before entering the arena, instead of the more common ‘instant start’.

“I’m still new to it. Before we roped today, I actually pulled out some old videos from here at Ponoka to study the setup here and it worked out.”

“My horse worked great,” says the Texan. “It’s trickyhere. You’ve got to know how to score. My horse made it easy. I haven’t even been on the barrier the first two runs, but just made good runs on the ground.”

“In the short round is where you’ve got to step up a little on the barrier because the best guys will be here that day and you’ve got to bring your A game.”

Another Texan, rookie sensation Bayleigh Choate, showed her A game potential in the barrel racingMonday, by posting a speedy 17.27 second run, just a day after she finished winning the Wainwright Stampede.

Utah’s Ty Allred was the fast steer wrestler of the opening performance at 4.0 seconds, but Joseph King managed to put together a pair of runs in the Stampede leading time 11.8 seconds before he jumped in the truck to be back at work in Virden, Manitoba at 9am Tuesday morning.

Team ropers Bobby Louis of Vernon, BC and Daniel Kaiser of Breton, AB doubled down by being fastest of the performance in 6.3 seconds, and also leading on two runs with 19.1 seconds.