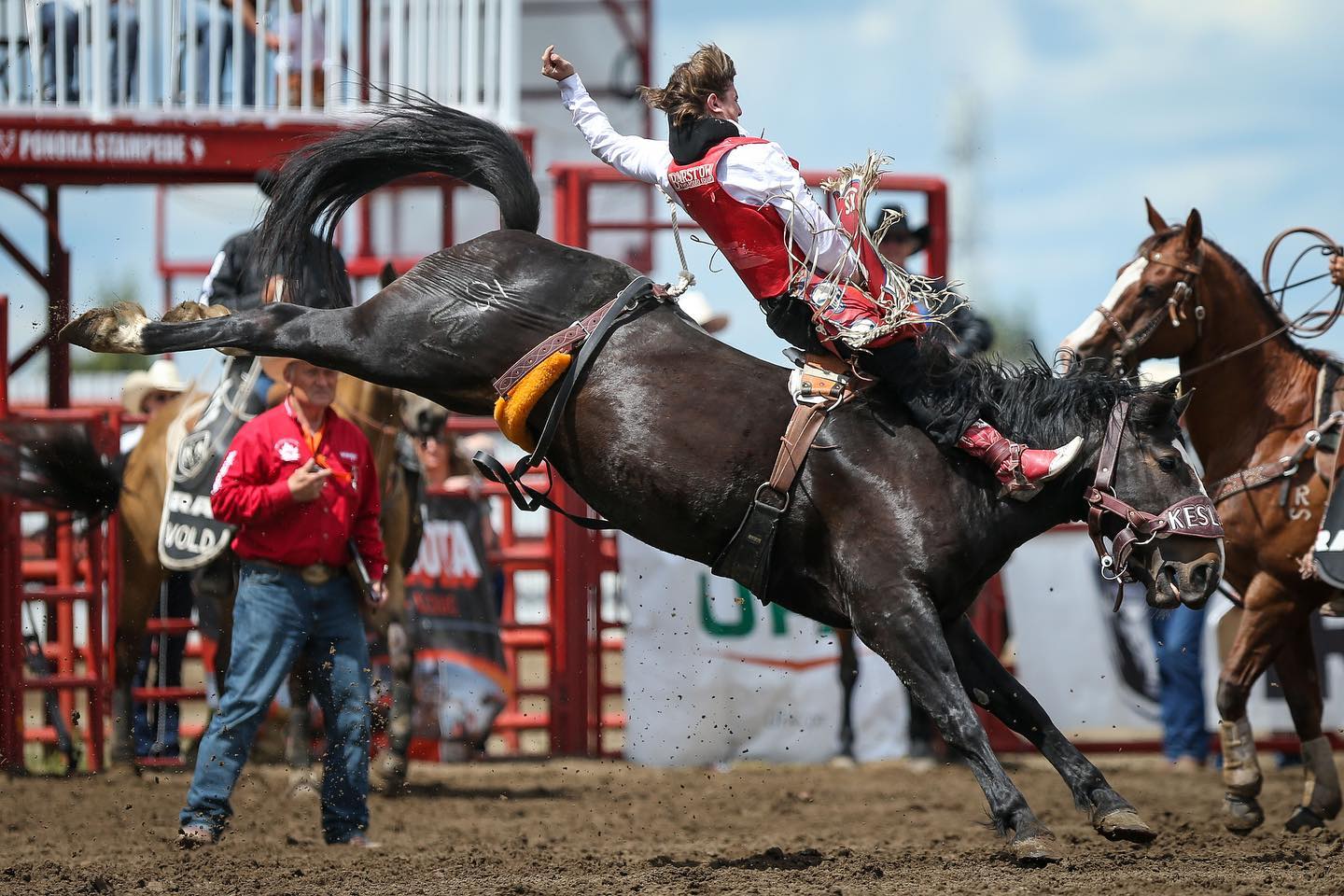 The Ponoka Stampede has a motto – the Wild West of ’36 Lives On. Well, the new Wild West of 22 made a touchdown in Ponoka Tuesday afternoon. Rocker Steiner came to town. He’s an 18-year-old kid who grew up wakeboard skiing on the water, has flowing locks and a mischievous grin, and boy does he know how to work a crowd. Steiner got to match moves with a Duane Kesler horse called Little Rotten and the result was anything but, giving the cool kid a chance to display his high flying spurring style. Judging by the 87.25 score, the judges were impressed too.

“This is my first trip to Canada,” says Steiner, from Weatherford, TX. “I’m glad to be here!”

Much like some of the rodeo families around Ponoka, Steiner has the sport in his blood back three generations. In fact, he flew in to Ponoka with his grandpa, Bobby Steiner, the 1973 World Bull Riding Champion. And did I mention his father Sid was the 2002 World Steer Wrestling Champion? Oh, and both his mother and grandmother were barrel racers. He’s the first riggin rider in the crew.

“The water sports started leaving, and it was just more rodeo. I just fell in love with this, and it’s hard to have to two loves and do them both. I haven’t wakeboarded much since I was about 14.”

“This sport fits me a lot better. I was too big of a headcase to be a great wakeboarder.”

But Steiner did learn to ride out the highs and the lows of the sports world from his time on the water. And he also got some valuable advice from his Dad.

The best saddle bronc ride of the third performance came from another cowboy with a rich heritage in rodeo. Lefty Holman, of Visalia, CA has a grandpa and numerous uncles who competed at the NFR in the event. Holman marked 85.5 on Mushroom Cloud, to move into third place in the standings behind leader Layton Green.

The steer wrestling leaderboard got a major shuffle when James Struxness of Texas wrestled his morning steer in 4.7 seconds, and his afternoon one in 5.2. The 9.9 second total gave him the top spot overall. He got the job done on the famous Curtis Cassidy horse Tyson, last year’s World Steer Wrestling Horse of the Year.

“I started riding Tyson this winter, and had a really good winter on him and now we’re just starting our summer run now,” says Struxness, who hails from Perrin, TX. “He worked good here and we did good.”

“This is my first time to Ponoka. I like these different setups where you’ve got to run the steers out there a little bit. I’m having fun so far.”

There’s also been a change at the top in the team roping, where the young rookies turning heads in Canada showed their stuff. Levi Schmidt of Barrhead and Kyle Wanchuk of Sherwood Park put together a pair of runs in 5.7 and 6.8 seconds, to claim first by a tenth of a second. Trenton Smith of Texas had the fastest tie-down run of the day at 9.9 seconds, but both Logan Spady of Alliance, AB and Matt Shiozawa of Chubbuck, ID moved into the standings, with their matching two run totals of 20.2 seconds. The leader remains Shad Mayfield of Texas. Despite a rain shower, Kirby Penttila of Calgary sped through the barrel

pattern in 17.80 seconds, to slide into sixth place, where Bayleigh Choate of Texas remains the leader. And they added two more bull rides into the collection Wednesday, with Ashton Sahli of Lacombe the highest mark, at 84.25 on Flight Risk. Lonnie West of Cadogan is still high man with his 88.