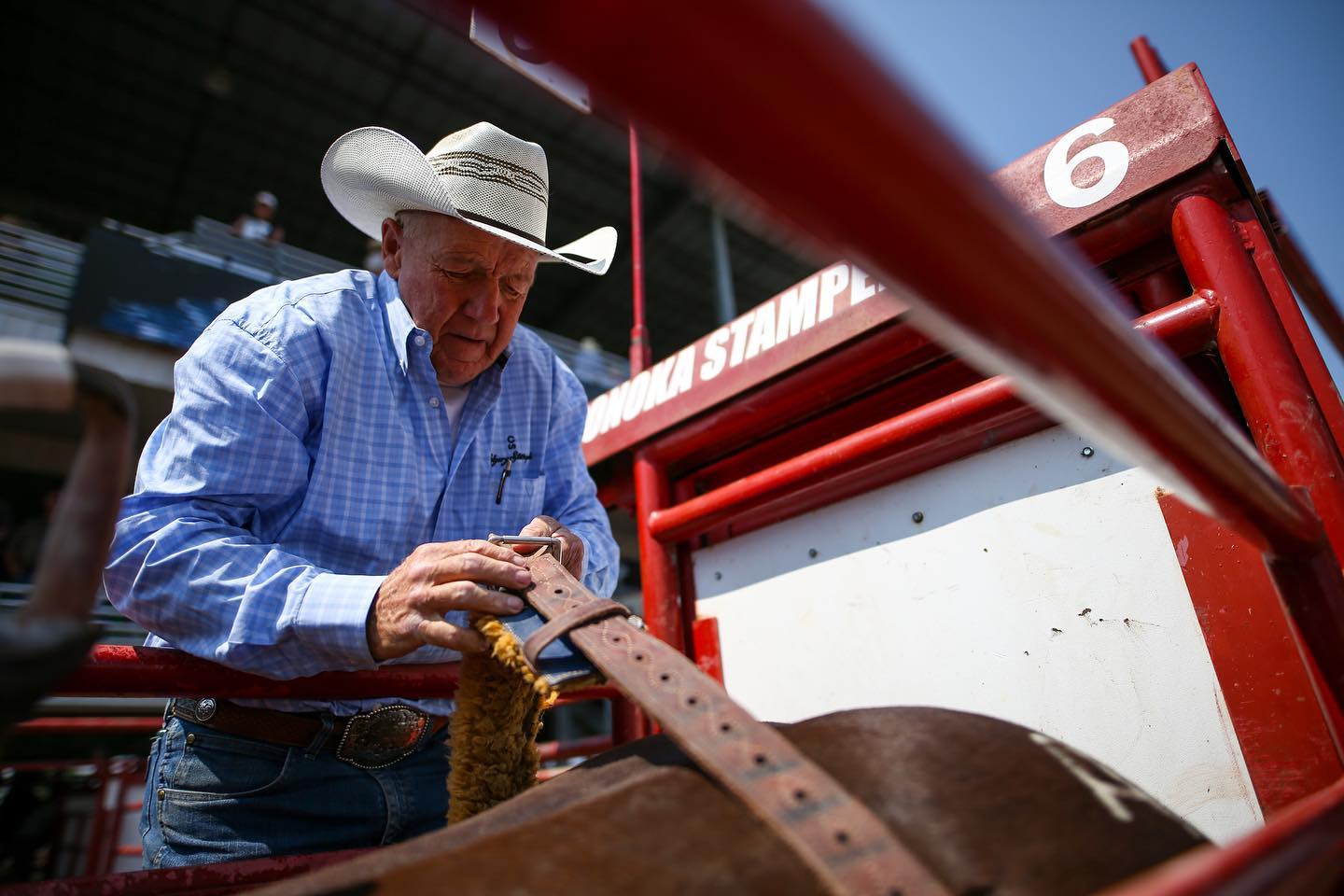 Funny how a day can turn out much differently than you’d think. And there’s no better time than Canada Day at the Ponoka Stampede for such a turnaround.

Dawson Hay came to the Ponoka Stampede mainly to support his friends who were riding, since he was nursing a sore quad muscle that’s forced him to turn out of several rodeos over the past week. He’d planned to do the same at this show. But when he got to the familiar grounds, spent some time with the Canadian Pro Rodeo Sport Medicine Team and thought again about the horse beside his name, he made the decision to get on after all.

It proved to be a great choice.

In a stellar section for the fifth day of Ponoka Stampede action, there were some outstanding rides. Hay’s traveling partner Jake Watson was 87 points on Redon Acres, Kole Ashbacher of Arrowwood was 87.5 on Zoaria Hills, and Zeke Thurston spurred to an 87.75 on Zastron Acres. Then it was Hay’s turn to nod his head on Cracking the Till. It was an explosive eight seconds of high-flying hooves and spurs and in the end, the judges handed out an 89.25, making Hay the new leader of the Ponoka Stampede.

“That’s an amazing horse of the Calgary Stampede’s,” credits Hay. “It got me down the other day at the Wildwood Bronc Bustin. I showed up here today wondering if I was going to get on or not. Honestly, I wasn’t expecting to get on, but I just had a feeling.”

“I’ve just got to thank God for everything here.”

“You know, it’s been a slow spring for me battling with some of this stuff, and jumping through saddles. It’s kind of been a whirlwind here lately, so a ride like that really pats a guy on the back and makes him feel good. You remember why you love this sport so much,” comments the three-time CFR and two-time NFR finalist.

“Going forward it’s given me a lot of confidence.”

It’s only fitting to come at the Ponoka Stampede for the Wildwood cowboy.

Hay been coming to the rodeo since he was just a little guy, playing in the dirt back behind the chutes with his brothers and other cowboy buddies, while his dad Rod Hay rode broncs. Then he came to do steer riding, and novice events, and now in the open saddle bronc event.

“This arena, this crowd, the amount of work that everyone does to put this rodeo together,” marvels Hay. “It’s one when I was little I went to every time my Dad was up. I thought this was the biggest rodeo in the world. It’s probably my favorite.”

“I love coming to this rodeo,” says Aus. “It’s been a few years since I’ve been here. It’s the same every year – the atmosphere is amazing. I’m so thankful we get to come across the border and come rodeo up here again.”

“I was in Reno when I got stock (drawn) for this rodeo, and I kind of got goosebumps. You start thinking ahead, through a few rodeos you’ve got to go to in between.”

“Twin Cherry is an incredible athlete, a tough horse to ride. I’ve been on her before but it didn’t go that well, so I’m really happy that I was able to put it together today.”

Barrel racers from the opening day of the Stampede dominated the top of the Ponoka leaderboard…. until Canada Day. That’s when the Wills’ sisters from B.C. rode into town. Lane Wills rounded the pattern on her horse Halston in 17.41 seconds, to move into second place behind the 17.27 second time from BayleighChoate.  Wills and her sister Brett own the horse together, and both helped train him. But it’s his first year on the pro rodeo trail.

“My goal was to have a really good first barrel,” says Wills. “Sometimes I ‘safety up’ and go a little bit too slow to it sometimes. But today I wanted to get some speed to it, and he had a great first. I’m very lucky he’s very fast and loves to turn, so it’s easy for him.”

Halston is right at home in the wide, open spaces of Ponoka’s arena.

“We were in Airdrie this morning and it’s a really small 13 second pattern and I didn’t have a very good run this morning. He definitely prefers the bigger outdoor pens.”

Wills’ sister Brooke also ran, and her 17.81 second time is right at the cutoff point for who will qualify for Sunday’s Finals. Bashaw’s Marci Laye (17.74) and Ponoka’s own Shelby Spielman (17.77) are also now inside the top twelve.

It was a good day at the rodeo office for Glentworth, SK’s Jesse Popescul. He had the fastest tie-down roping time of the afternoon with an 8.7 second run. His two-run tally of 18.6 seconds is now fourth best, behind Kyle Lucas and his 17.5 second total. Then Popescul and his partner Logan Cullen of Courtenay, BC got a steer roped in 6.3 seconds for best team roping time of the day. Their two run total of 13.6 is third best overall now, trailing the 12.5 from leaders Levi Schmidt and Kyle Wanchuk. Casey Lawes of Provost was the speedy steer wrestler with his 4.2 second run, but his earlier ‘no time’ keeps him out of the overall race, where his neighbor Scott Guenthner is still on top with 9.1 seconds.

None of the bull riders managed to make the whistle Friday afternoon, so there’s only seven qualified rides so far. They’ll take twelve to the Finals Sunday afternoon. Saturday’s rodeo is the last chance for contestants to make that roster. Then the top four from each event Sunday afternoon head to the rich Showdown Sunday night at the 86th Ponoka Stampede.