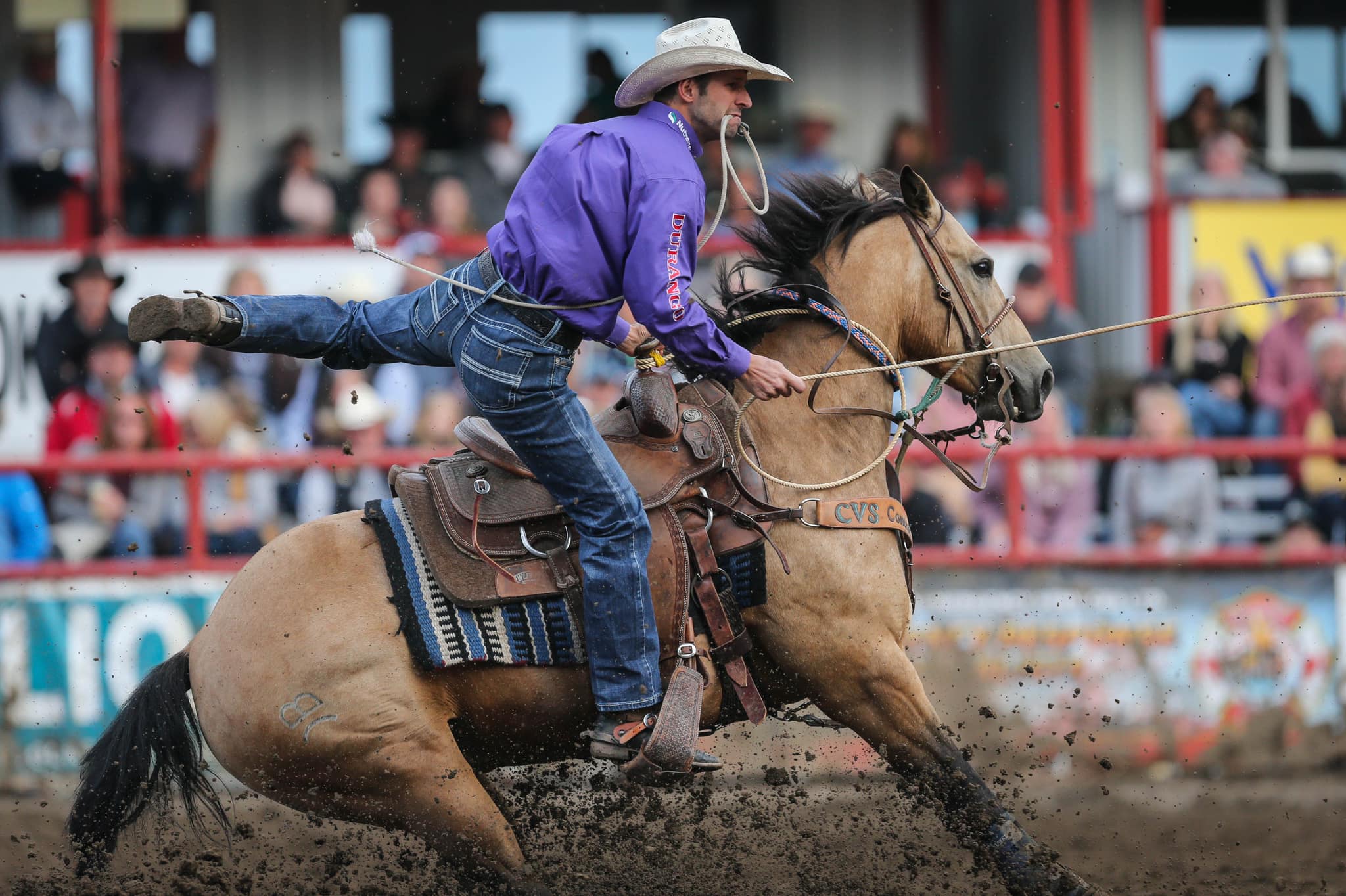 Ponoka may be considered a small town in Alberta, but it looms large in the western world for the world class rodeo it hosts. For the first time in three years, Ponoka Stampede Champions were crowned Sunday evening, making a big difference in the travel plans and lives of the winning contestants.

He may come from Sulphur, LA and live in Texas now, but Shane Hanchey is always at home in Ponoka. He was as happy to be back at the 86th Ponoka Stampede as the rodeo fans were. Hanchey came out in a Showdown Round as one of three World Champions, to turn in the fastest tie-down roping run of the week, 7.9 seconds, and add a second Ponoka buckle to his collection.

“This field of ropers might have been the toughest Final Four yet at Ponoka for me with Shad (Mayfield), Caleb (Smidt) and everybody knows how much potential and credibility Kyle Lucas has up here,” says Hanchey, who used the outstanding Canadian horse owned by Logan Bird called Peso. “So that was a good win for me. You know you’ve got to be on top of it.”

“I got off a little faster than what I normally like to get off. I’m 32, no spring chicken. This is such a unique setup. Me and Peso were going really fast. But I knew that once I put my hands on the calf, she was plenty good.”

Thanks to the encouragement of his student Beau Cooper of Stettler, Hancheymade a rare appearance in the team roping as well, and he and Cooper made it to the Finals. Despite a miss there, the money won also gave Hanchey another Ponoka buckle.

“Who would’ve thought that I was going to win the Hi-Point award at Ponoka?”, he laughs, also noting he now may have to rethink his rodeo schedule.

“I make this rodeo a priority even over the good rodeos down south. Not having this thing the last couple years sure put a damper on a lot of people up here, but for me as well. This also threw a pretty good wrench into my summer plans, now that I’ve got $17,000 won up here. I just know I’m going to have to look at the CPRA schedule and see if I can find a way to get up here to the CFR one more time.”

Qualified bull rides were in short supply at this year’s Ponoka Stampede, with the exception of Jaren Parsonage and Lonnie West. The two experienced hands stayed on all three of their bulls, battling back and forth for the top spot. In the Showdown round, Parsonage marked 89.50 points, but then West came out seconds later on a bull called Hard Not to Get to chalk up 92.75 and claim the Stampede bull riding honors for 2022, not to mention $22,000 in prize money.

“I beat my steer riding score,” joked the cowboy from Cadogan, who was the 2009 Ponoka champion in the youngster’s event. “In my rookie (bull riding) year, I won the average here, and they got me in the four round. So to come back here and win the average and the four round is just unreal. It feels good.”

“I knew I could ride that bull. I knew I had my hands full, but you can’t doubt yourself. You’ve just got to believe and it works out. This place is my favorite rodeo. I was thinking about it right before I got on this bull, there’s just something about these big shows, when the pressure’s on, it just jacks your skill level up. It just makes you try and ride that much more.”

Bayleigh Choate made her first trip ever to Ponoka, traveling with her parents from Forth Worth, TX. She became one of the biggest single money winners of the Stampede by sweeping first every time she ran. Her consistently fast times on her horse Dash of 17.27 seconds, then 17.43 in the Sunday finals, plus a 17.39 in the Showdown, netted her $21,301.

“I just like the atmosphere, and the crowd really gets the energy going in this place. It’s just been awesome, and he really thrived off it,” bubbles the 19-year-old who is leading the world rookie standings in her event. “He really surprised me and I’m really thankful for it.”

“I always say ‘when your money’s up, jockey’, and I love it. The more build-up to a run, the better for me. I feel like I ride my horses a lot better. So I like the bigger, high-pressured intense runs – those are fun for me!”

Leighton Berry was a newcomer to the Ponoka Stampede as well, but he made his presence felt in a big way, when he teamed up with the Calgary Stampede’s horse Yippie Kibitz for 90.25 points in the Showdown, to beat his traveling partner Caleb Bennett by a mere quarter point, and collect a paycheque of more than $11,000.

“Wow, that was the most amazing feeling horse I’ve ever been on,” says Berry, from Weatherford, TX. “Everybody always gives a lot of credit to that horse for having a lot of heart and always doing her part. She’s taken a lot of guys to the paywindow and made ‘em champions, and I’m just so thankful that I got to draw her today.”

“I haven’t been up to Canada very much. This is my first year on my (pro) card. I plan on trying to make the CFR this year, and it’ll be my first time at the Calgary Stampede, so a lot of new experiences for being 23.”

Layton Green grew up in Meeting Creek, not far from Ponoka. Originally, he thought he wasn’t among the top four saddle bronc riders advancing from the Sunday afternoon Finals, but when he found out he was indeed riding at some more cash he made the most of it. Green was matched up with Calgary Stampede’s Yesterday’s Delivery, the same horse he’d been 92 points out several weeks before at the Wildwood Bronc Bustin. This time he managed to squeeze out an extra bit, chalking up 92.25 to take his first Ponoka Stampede buckle, and earn more than $15,000.

“This one’s been on my bucket list. It’s one of the hardest rodeos to win in North America. To get the win today, it was pretty cool.”

It was the second time to the winner’s circle for steer wrestling Stephen Culling, who hails from Fort St. John, BC. After making back-to-back runs at the Stampede in under four seconds each, Culling had a big cushion heading into Sunday afternoon. Turns out he needed most of it, but despite a 9.2, he still made the top four. Then he was back to his speedy ways, getting his Showdown steer handled in 3.7 seconds, to collect just over $20,000, as the fastest of the crew.

“I don’t normally get three looks like that here. I kind of dropped the ball a little bit this afternoon and didn’t do my job, but made up for it tonight,” says Culling, who was more than pleased about the performance of his horse Buck, who helped plenty of cowboys win some coin at Ponoka.

“That was the 26th run on him this week. He’s pretty phenomenal here. He gives you a chance every time, and lets you focus on catching the steer’s heads well. It makes it way easier having a horse that works good here.”

Now Culling may also be adjusting his summer plans.

“This is huge. This takes a lot more pressure off of Canada rodeos. I’ve been focusing up here this year, not really rodeoing down in the States very much. But my plans might’ve just changed a bit, and I’ll try to get entered up everywhere I can and get going down the road and make a shot at trying to make the NFR now too.”

The team roping winners both are past winners at Ponoka, but it’s the first time they’ve done it together. Utah’s Rhen Richard and Jeremy Buhler of Arrowwood tidied up their steer in a rapid 4.6 seconds, a second faster than Jeremy’s brother Clint Buhler and his partner Brett McCarroll.

“We finally had a steer that stayed in the middle and wanted to wait on us,” says Richard. “We’ve been making our run all week. We just needed that steer that let us do it.”

“We’ve put a lot of work into our run. I feel like we’ve got it somewhat established and we’re just going to ride the high. It’s been fun.”

The win was worth $7400 apiece, giving both ropers a big boost in their respective standings.

The Tommy Dorchester Dash for Cash for the WPCA wagons saw a very close finish with three drivers across the finish line within hundredths of a second of each other. But Ross Knight, driving the Canadian Premium Meats outfit, nosed across first, in 1:20:50, to claim the $50,000 bonus. Obrey Motowylo was the Aggregate winner for the week with his Co-Operators rig. The All Pro Canadian Chuckwagon Championship went to Cole Adamson, running for Pidherney’s Start To Finish in 1:18:39.