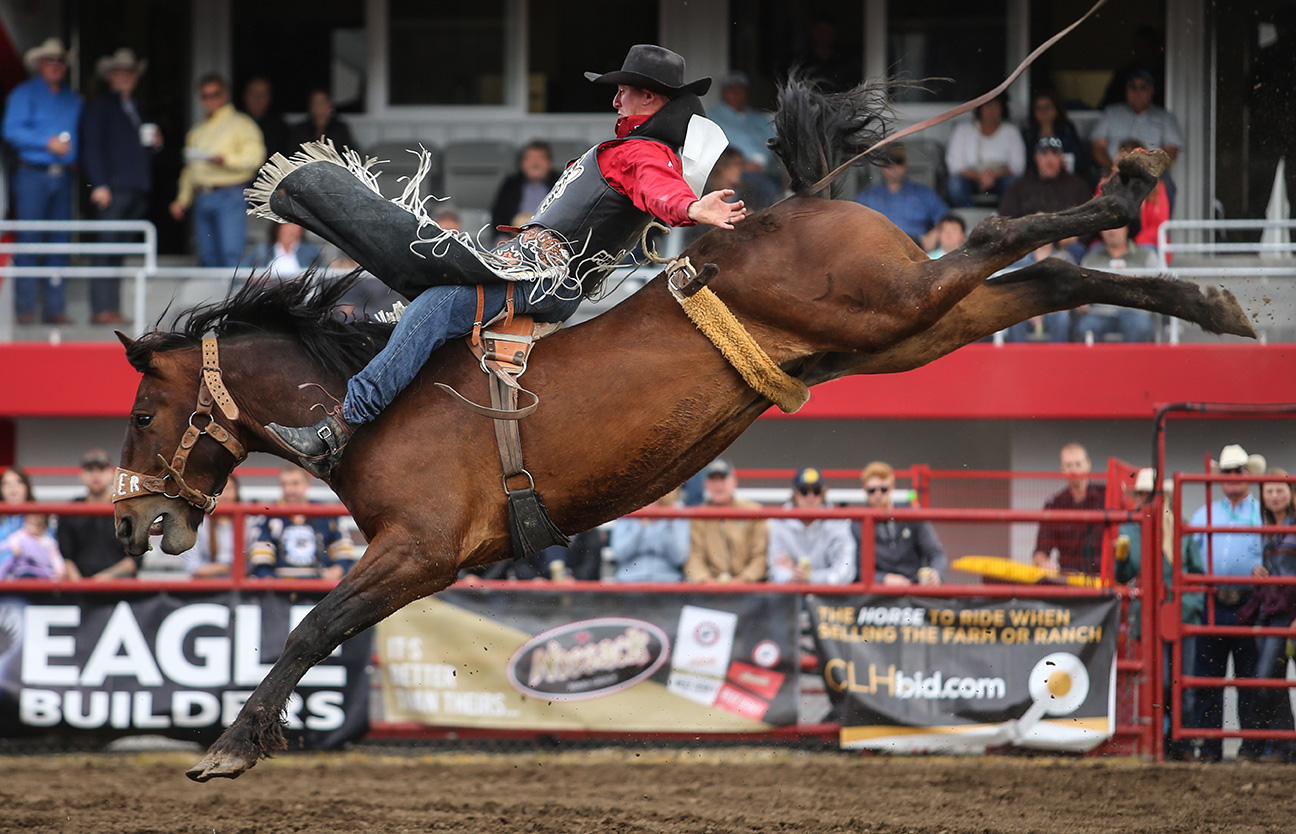 There’s nothing like a little hometown magic to make a cowboy’s day. Especially when you were raised in a community where rodeo rules.

“That horse has been phenomenal for years now,” says Vold. “It’s the first time I’ve been on her but I’ve seen her a bunch so I knew what I was up against. I couldn’t ask for anything better.”

The three-time Canadian champion maximized his opportunity, and the 88 points for eight seconds of effort sits on top of the leaderboard after the first performance of the 83rd annual Ponoka Stampede.

Vold had taken a little time off for a wrist injury but returned to his rigging a week ago.

“I’m fresh, I’ll tell you that,” he grinned. “I’m ready to go. It’s a good time of the year to be healthy. There’s a lot of money up and a lot of good guys. These kids ride good and they just keep pushing me. When you want to come back and play with the wolves, you’d better be on your game.”

Nipping at Vold’s heels opening night were a few of those ‘wolves’, with Caleb Bennett sitting second at 87.75, and 2018 Ponoka winner Richmond Champion sitting third with his 86.25 mark.

Ponoka fans had plenty to cheer about in the team roping as well, when local favorite Brett Buss and Klay White made their loops sing and got one snagged in 5.9 seconds, for fastest of the round. They’re also leading in the total time on two runs with 20.0 seconds.

Steer wrestler Hunter Cure got one turned over in the nerve-wracking ‘long score’ setup in 4.9 seconds, to take the front spot in the overall race, with 13 seconds on two runs. Layne Delemont was just two ticks faster to lead the round with 4.7 seconds. Cure, a Texan, is happy to be back on his mount Charlie, a 20-year-old horse that helped him win two world titles, but has been off with injury for over a year.

It was his first trip to Ponoka, so they had to show Chase Brooks where to retrieve his saddle after his ride, but he needed no such guidance in the arena when he nodded his head on the Kesler horse Willowbrook in the saddle bronc riding.

“The horse felt awesome,” said the Montana man. “I’d been on her before and when I saw I had her here, I was pretty excited. I knew I had a good chance. Hopefully it holds and I can get some big money out of here.”

“This rodeo is huge. It pays like crazy. One win here is almost like a real good long fourth (of July) run, and if you can do it all in one spot, it’s even better.”

World Champion Hailey Kinsel and her famous horse Sister made their first trip to Ponoka count as well, rounding the barrel racing pattern in 17.511 seconds.

“It feels cool here. I’ve always wanted to run here. I always thought she would do well here, so I’m glad she did,” said the Texas cowgirl.

There were two bull riders who made the whistle opening night, but Edson’s Micheal Ostashek has a slight edge with his 84.50 point ride on Ivy League, while Texan Jeff Askey was 84.25.

“It would be the biggest accomplishment of my career so far if I could get back to the Finals,” said Ostashek.
A pair of tie-down ropers posted the best times of the performance. Saskatchewan’s Jesse Popescul and Virgil Poffenroth, from Red Deer County, both managed to tie up their calves in 9.5 seconds, but Poffenroth is a tenth of a second faster in the total on two race, at 21.2 seconds.