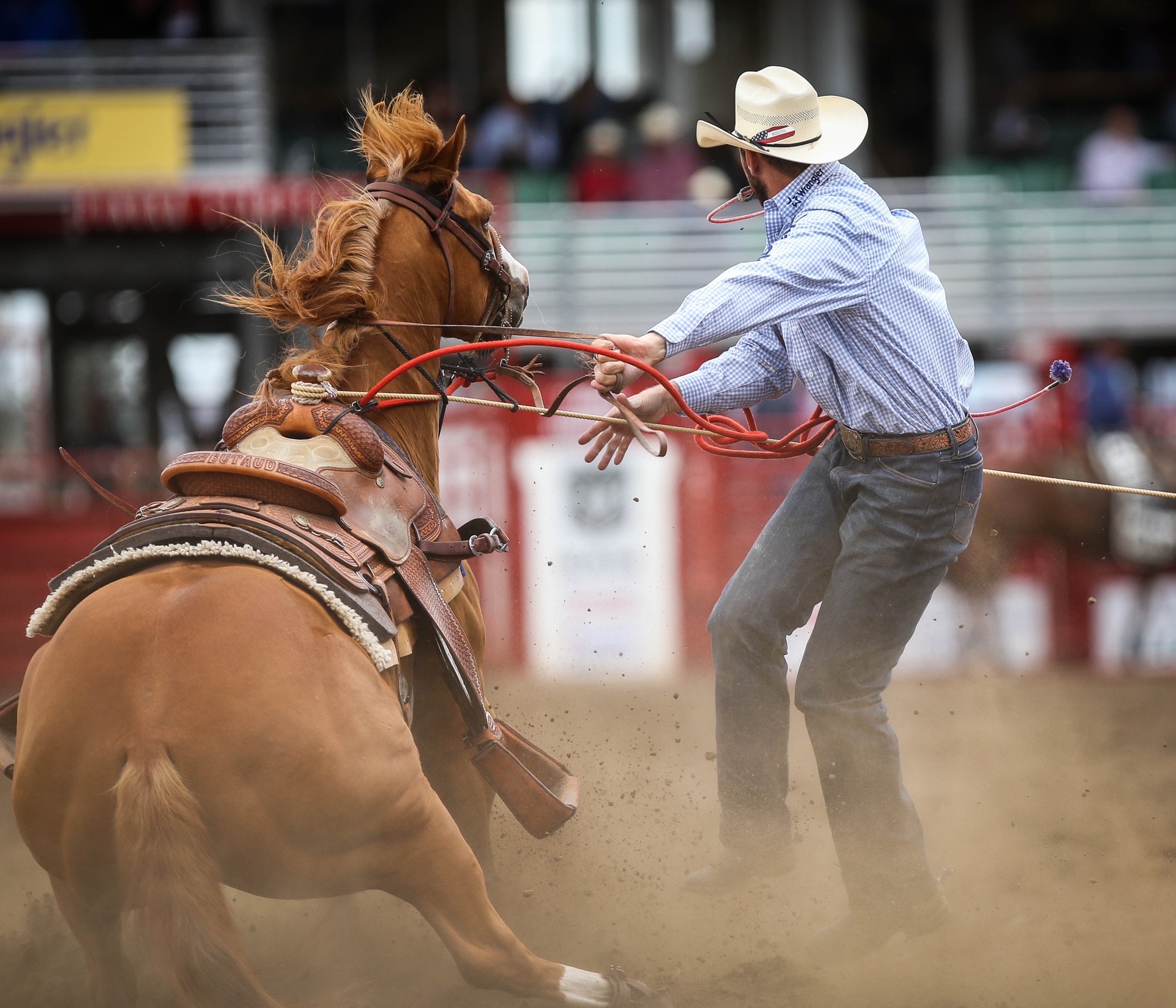 There are only a handful of rodeos in North America that use the ‘long score’ set up for timed event contestants, and the Ponoka Stampede is one of the most famous. Basically, it means both the competitors and the animal they’re matched up with hit the arena at a flat run, coming down a long alleyway instead of from a short burst start. Timing is magnified, so if you’re a tad too late, it’s giddy-up-go or if you get going too quickly, it’s big-time whoa. Add that to the already complex task of roping a calf and safely securing it with a rope in under ten seconds, and timed events at Ponoka are not for the faint of heart.

Jake Pratt managed to put together a pair of runs that should ensure he has to make a return trip to the central Alberta town. The cowboy from Ellensburg, WA has plenty of experience with the long score and is now the frontrunner in tie-down roping with a tally of 18.3 seconds on two runs.

“I love this rodeo,” said Pratt. “I love Pendleton, I love my hometown Ellensburg. But right here when the thundering herd goes around, if you don’t get revved up from that, you shouldn’t be rodeoing!”

“One year I made the shoot-out round. It was a while back but, man, it’d sure be nice to get back there again this year,” said Pratt.

“I don’t love my time on two, but I’m hoping it gets another one for the short round.”

Like all timed event competitors, Pratt made his first run in the morning slack, and that was his best, at 8.2 seconds.
“This morning was picture perfect, just how I thought it up. Got a good start, had a good calf and made a good run. This afternoon, I might have backed off a little bit, and when I roped and went to get off, I hooked my horse with a spur, and so he jumped forward, and I (just) about fell down and ate a little dirt here! But I made it through,” he smiled.
Near-disaster averted, Pratt managed to get his job done in 10.1 seconds, seventh best of the round. Then on one of the busiest rodeo weekends of the year, he was dashing off to fly to Reno, while his horses were being taken down to Oregon.
“We’ll figure the rest out when it comes time, if we get another one in the short round.”

On the program, Jake Finlay is listed as hailing from Goodwell, OK. A quick visit will soon give away his real Australian roots. But it’s his college rodeo time in Oklahoma he credits for success he’s currently having in bronc riding. Finlay showed his prowess in Ponoka by marking an 85.5 on Kesler’s Navajo Sun.

“I’m pretty sure that horse is older than me,” he joked. “I got on it six years ago in Austin, TX when I’d been in the States about three weeks, and she manhandled me pretty good. I’ve been waiting for her for a long time. So it was good to get my revenge on her, especially here. There’s no better place to do it than Ponoka. She felt really good.”

Finlay won the national college title in 2018 and finished up his education in animal science and nutrition this spring. So far, it’s the rodeo schooling that’s really paid off.

“They teach you how to ride broncs, teach how to win money, they give you a mindset down there – to be positive and to keep going.”

Finlay’s best Ponoka score ever sits second behind leader Chase Brooks with his 86.5.

“He’s really electric – he really feels like a cat under you.”

Lacasse has battled the injury bug but hopes that’s behind him as he drives to do a full season without having to take time off to heal.

“This year I’ve been working out every day and grinding every day, trying to do everything I think is right, and it’s been working.”

There’s a new dynamic duo at the front of the team roping pack after Erich Rogers of AZ and Paden Bray of TX put together a tidy pair of runs in 11.5 seconds. Another Texan, Hunter Cure, hung on to the steer wrestling lead with 13.0 seconds on two runs, but Ty Miller of Wainwright took over third place Wednesday with his 14.4 second total.

Only one of the bull riders managed to get a score Wednesday, but he came a long way to do so. Italo Aguilar of Brazil marked 82.75 points, to sit third behind leader Michael Ostashek and his 84.5. The fastest barrel racing time of the day belonged to Jennifer Sharp of Texas at 17.839, to sit third behind fellow Texan Hailey Kinsel, who leads with a 17.511.