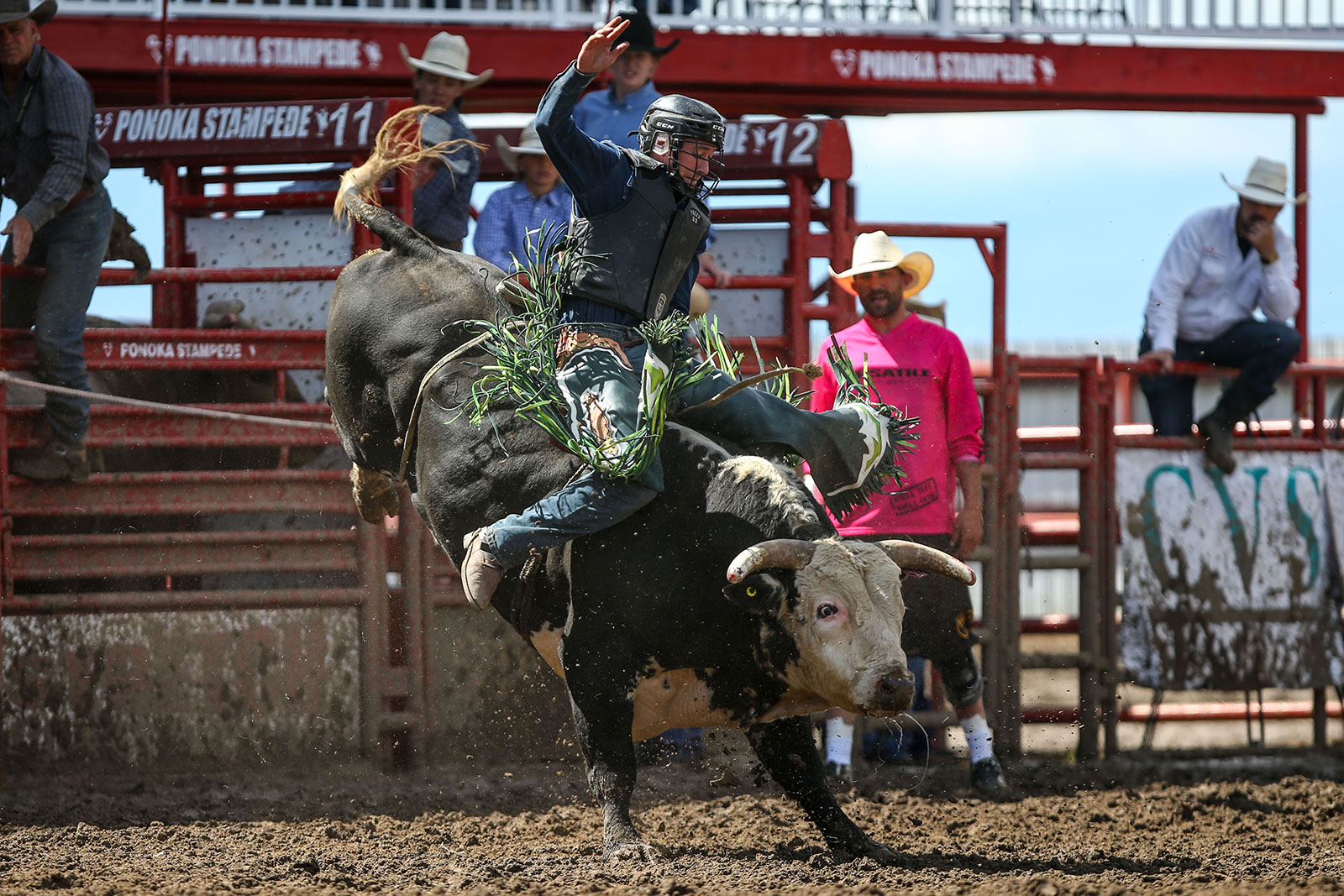 Parade day brought out the sunshine for the Ponoka Stampede, and the mud left from Thursday’s downpour began to quickly dry up.

The steer wrestlers were definitely in a good mood, shaking up the leaderboard in the fourth performance. Montana’s Ty Erickson made the speediest bulldogging run of the Stampede so far, when he got one turned over in four seconds flat Friday afternoon.

But Tanner Brunner took over the number one spot overall, after he was 4.6 in the morning slack, and followed that up with a solid 6.7 in the afternoon. His 11.3 second total sets the new pace, followed by Erickson with an 11.8.

Brunner was anxious to make amends in only his second appearance in Ponoka.

“I broke two barriers last year,” recalled the Kansas cowboy, of his Ponoka debut. “I came back this year with a new opportunity, and lessons learned, and wanted to give it a second shot.”

“My morning run was a little wet. But the grounds crew did a great job, getting the arena dried down as much as they could. I just wanted to get out at the barrier first off, go from there and do the best I could on the steer.”

“I came back this afternoon with the mindset of just getting out at the barrier and going and making a good run on the ground. I was able to have another good steer, as well as good horses to ride. To put two together in this situation is a little difficult, but it’s about consistency, and just doing your job day in and day out.”

They brought out the juice in the bull riding Friday at the Ponoka Stampede. But this time it was the cowboys who showed their stuff, dominating over some tough bulls. In fact, they qualified more bull riders in the fourth performance than in the previous three days, with eleven names now on the Finals list.

Best of the high marking bunch was Utah’s Tyler Bingham, in his very first trip to Ponoka. He was matched up with Kubota Summer Warrior.

“I’m not gonna lie – he tricked me,” admitted Bingham. “I thought he was just going to go left, and he faked and went right, then came back left. He about bucked me off, but somehow I hung to it.”

The resulting 86.75 mark moved him into second place, just behind the 88.75 from Jacob Gardner the day before.

Bingham is in the truck with five-time World Champion Sage Kimzey, and his younger brother Trey.

“It’ll be a good year. You know if you want to be the best you’ve got to ride with the best. That’s why I like to jump in there.”

It was a good day for the truck, with Trey chalking up 83 points and Sage earning 86. Then the three of them dashed down the highway to compete at Airdrie in the evening rodeo performance. They’ve got a hectic weekend ahead, but so far, the plan is for all three to head back to Ponoka for Monday’s Finals.

“They’ve got big money here on Monday, so we’re ready to come get it,” grinned Bingham.

Ponoka’s own Jordan Hansen put himself in contention to be part of Monday’s bull riding Finals as well, when he turned in an 83.5 point ride on Click Clackin. He didn’t see much of his home though, only arriving in the morning after an all-night drive from Williams Lake, and heading out to Airdrie as well for another bull Friday.

“I’m making the Reno short go, so I get to fly back there tomorrow, then Cody, Wyoming the next day and then get on another plane to fly back home for here if, hopefully, I can stick around in the top twelve.”

Hansen is happy to be feeling healthy and back to riding, after missing a big chunk of last season from injuries.

There was a little rain in the saddle bronc riding, of the cowboy variety, as a fresh pen of horses left some big names in the dust before their whistles went. But Dusty Hausauer managed to weather the storm, on one of the strong ones, the Calgary Stampede horse Tiger Warrior.

“I got on him quite a few years ago in San Antonio, not for very long, but I got on him,” quipped the North Dakota rancher. “He’s pretty unpredictable. He’ll do anything to get you on the ground. You just don’t know what he’s going to do. Like my traveling partner Chuck (Schmidt) was saying, ‘by the time you get done with the jump you’re trying to ride, he’s already on to the next one, moving in a different direction’. It feels like you’re one jump behind him.”

“Which is a lot better than last time, because I rode him for about one jump.”

Hausauer’s grit was rewarded with 83.25 points, putting him eighth on the qualifier list.

“I actually wanted that horse, and entered for today. I’m glad I got him rode. I hope I make the short round.”

It’s still Chase Brooks of Montana on top in the bronc riding with his 86.5 mark.

The ground was a little sticky, which made it a bit slower for the barrel racers. The fastest run of the afternoon came from Eryn Coy of High River in 18.149 seconds, which puts her in a tie with Shayna Weir of Ponoka and they’re hanging on to the final qualifying spots so far. No one’s been able to budget Hailey Kinsel from the lead with her 17.511.

Hometown favorite Jacob Stemo of Bashaw had the high bareback mark of the performance at 82.75. Ironically, it came on Calgary’s Soap Bubbles, and Stemo is on the ‘bubble’, holding down the twelfth and final qualifying position, with Spur Lacasse still the number one man for his 88.25. Tie-down competitor Reese Riemer of Texas took over second spot in the roping, when he went to the head of the class in the afternoon round, with a snappy 7.8 second run, giving him 18.2 overall, just behind the 17.9 from Shane Hanchey. Kyle Lucas of Carstairs and his partner Troy Fischer of Mayerthorpe, the silversmith, made a smooth 6.3 second team roping go in the performance, but it was Keely and Logan Bonnett of Ponoka who came out the best on two for the day with 19.6 seconds, good enough for seventh overall. Ks Thomson of Lundbreck is the leader in the novice saddle bronc riding, after turning in a 67 point ride Friday afternoon.