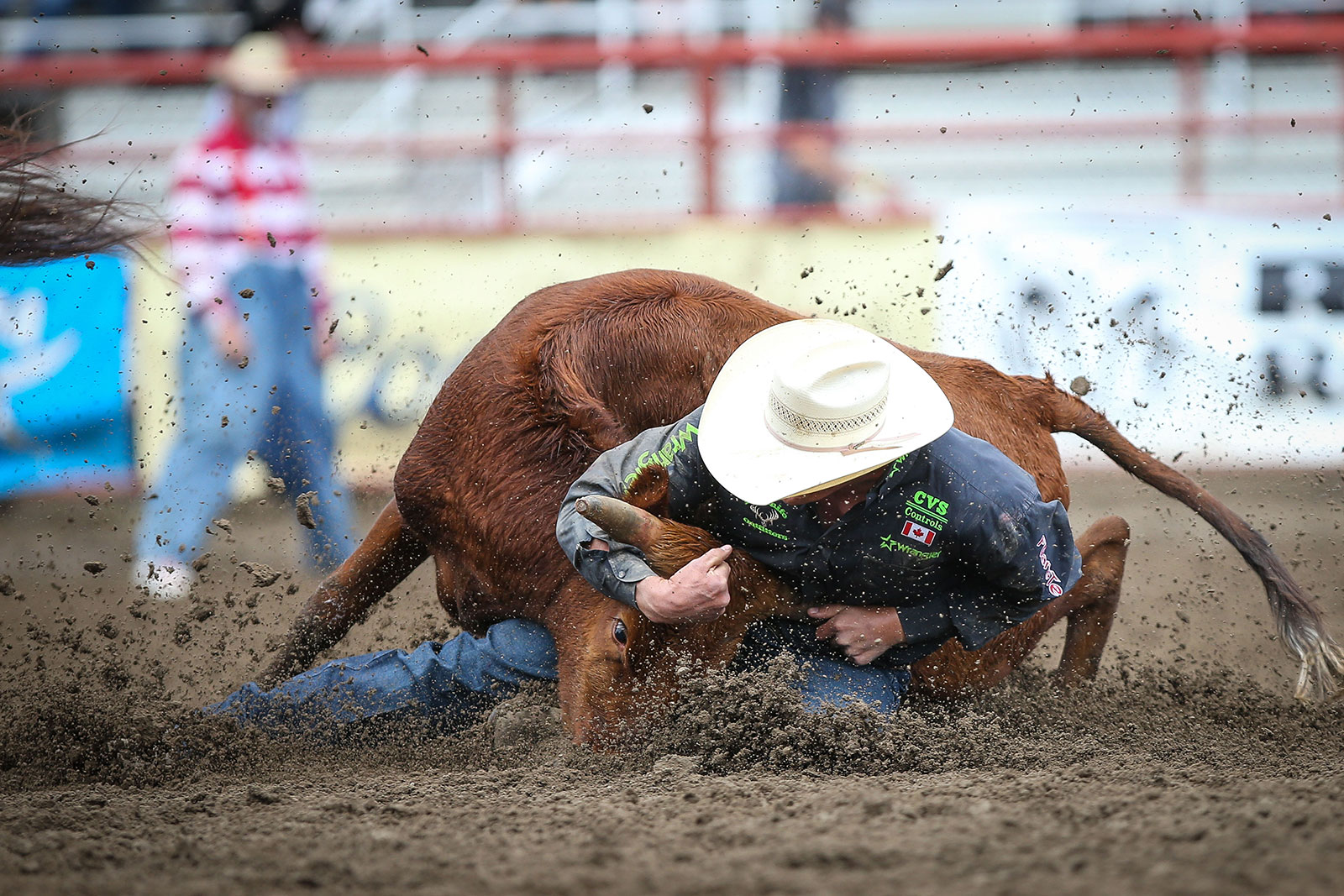 There are some things you can count on at the Ponoka Stampede.

There’s bound to be the odd thunderstorm, like the one that punctuated perfectly the thundering herd as it entered the arena Saturday with some real live thunder and lightning.

And there are a few cowboys that just seem to always excel when comes their turn to ride or run.

Like Zeke Thurston, the superstar who already has a World Gold Buckle to his name, along with a trio of Calgary Stampede titles, and a Ponoka one to boot.
The saddle bronc talent rolled into Ponoka for an eight second date with a C5 Horse called Showtime, and the two did put on a show. It was one the judge’s determined was worth 89 points, which jumped to the lead in the event.

“That was a really good horse, that I’d never even really seen before. He did just what they said it would – take a scoot, find a spot and show off, and that’s what he did,” said the Big Valley cowboy.

“This rodeo’s always treated me pretty good. It’s been a cool rodeo for a long time, and it’s only an hour from the house.”

That means Thurston has a chance for a day off for some family time during a hectic time in the rodeo year, coming back Sunday for some ‘Dad duty’ with little daughter Lucy Lou, while wife Jayne competes in the breakaway roping taking place in town as well.

Even though Thurston is only 23, the younger crew is nipping at his heels already with 20-year-old Dawson Hay of Wildwood turning in a shiny 87.75 mark on C5’s Thunderstruck to take over second place in the event.

“I’ve seen that horse a bunch, and I’ve seen my traveling partners and buddies all do good on him,” said Hay, a second-generation bronc star. “Once you get out on him, he’s just a really good horse. He jumps and kicks really strong and just the horse you’d really like to draw here at Ponoka.”
Hay is just coming off a three-month break for some knee surgery, but a win this month at Wainwright helped restore his confidence and get him rolling again.

There were two qualified bull rides to add to the list from Saturday’s action, with the top mark an 84.25 from Roscoe Jarboe of ID on Calliopi King. Cowboys now need to have a score better than 83 to make the cut in bull riding, where sometimes it’s been hard to get the full roster of riders for the top twelve in the Finals. Dawson Creek BC’s Jacob Gardner remains on top with his 88.75 from Friday.

Another sure bet each year at Ponoka is to have a Cassidy in the steer wrestling Finals, and Cody made his play to be there on Saturday. While Mike McGinn of OR made short work of his steer in 4.6 seconds, it was Cody Cassidy who bulldogged his way to tie for second place overall with his 11.8 second tally on a pair of runs. That’s the same number Ty Erickson has, and it’s just behind the 11.3 from Tanner Brunner of Kansas.

“It was a little bit hairy out there for a second, but I got a time and that’s all that matters,” said Cassidy, of his afternoon run where he had a hard-running steer.

“It’s not a race, it’s a marathon (at Ponoka). I think this is maybe eight times now I’ve made the Finals. I love it. I could come to one of these every day and I’d be happy.”

“That’s not a lot of rodeos anymore that get my heart beating and give me some butterflies but this is one that still does.”

“We put a lot of pressure on ourselves because it can make your year so much easier if you can come and do good here,” said the five-time Canadian steer wrestling champion.

Another timed event competitor who’s a regular at the July first Finals at Ponoka is tie-down roper Timber Moore, who won the whole deal in 2013. The Texan moved into a tie with Shane Hanchey at the front end when he put together two runs in 17.9 seconds.

“It feels good,” said Moore. “I drew two really good calves today. This afternoon my horse slipped a little bit and I was late. I kind of had to reach, trying to catch the calf and missed, but it fell on, luckily, and I just went down and tied ‘er.

“It feels good to be coming back to the short round and hopefully I can come back on another good one, and hopefully rope a little better,” he said, referring to his ‘fishing expedition’ with the last loop.

“I need to go buy my license after that one!” he quipped.

Moore, who has cousins in Canada, feels right at home in Ponoka.

“I’ve always had great success here. I love having to run them a long ways. You can still tie them really fast and the calves have always been great. I’ve just always had a good vibe here.”

Darren Dublanko of Thorsby had the fastest run of the afternoon at 8.2 seconds, putting him into a tie for second place in the go-round, but a broken barrier in the morning will keep him from advancing.

It was a speedy day for barrel racing, with five different competitors snagging a spot in the top twelve standings. It was Lynette Brodoway of Brooks who managed to slide into second overall by posting a 17.612 second run, followed by Mary Walker of Texas with a 17.624. The fast time remains the 17.511 from Hailey Kinsel.

Ty Johnson of Breton and Travis Gallais from Sylvan Lake impressed team roping fans in the performance with a 5.8 second run, third fastest of the go. But that was their only successful run. It was Riley Warren of Stettler and his partner Clay Ullery of Two Hills who made the biggest move, catching two head in 12.9 seconds to take over second place behind leaders Erich Rogers and Paden Bray with their 11.5.