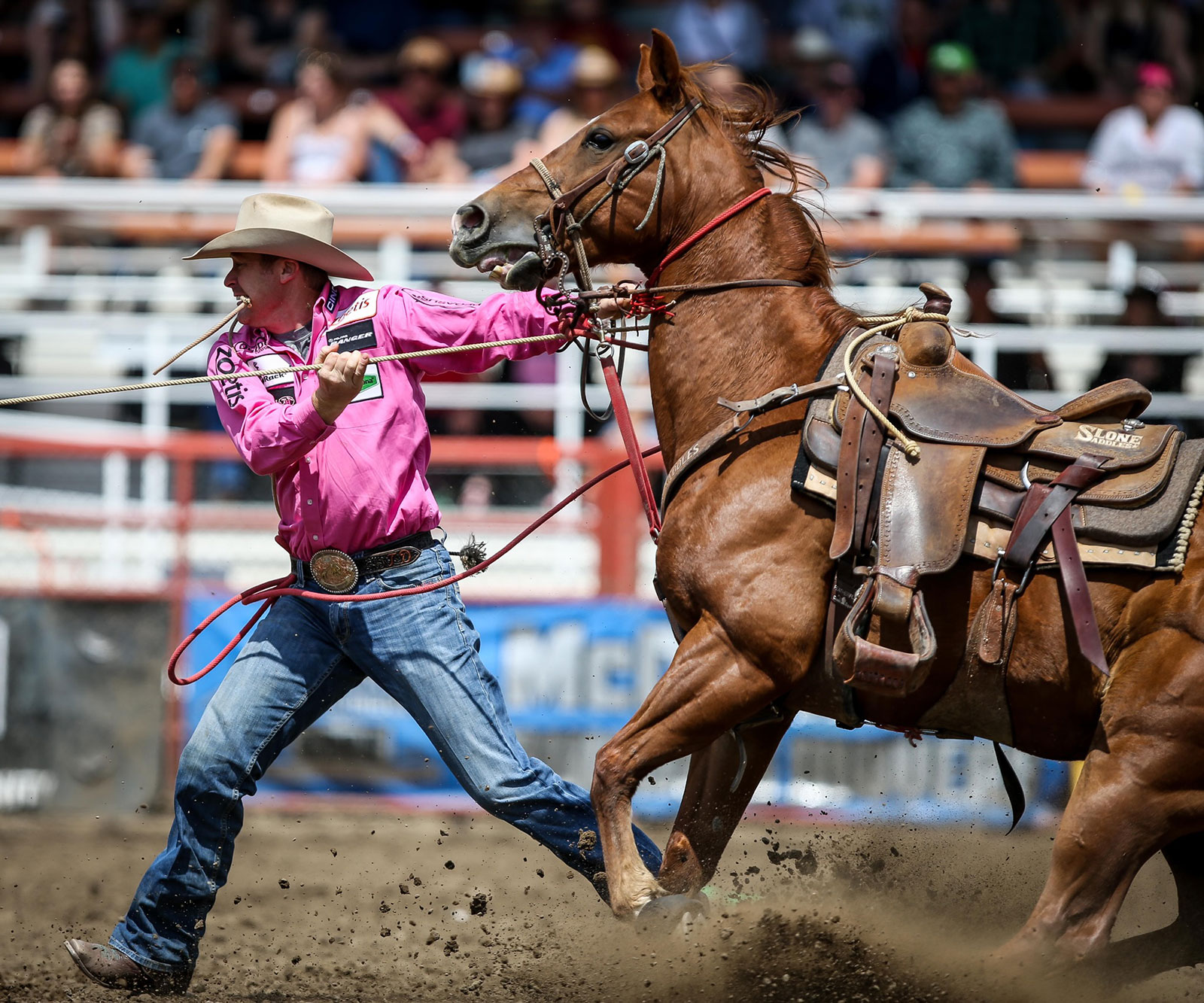 It’s never over til it’s over, and some contestants who thought they were in great shape for the 2019 Ponoka Stampede Finals may be making other travels plan, after Sunday’s final regular performance.

In fact, in the barrel racing, half the field of qualifiers made the cut from Sunday’s performance. They were led by Emily Miller of Weatherford, OK who posted a speedy 17.240 second run, pushing back the long held leading time of 17.511 from Hailey Kinsel. In the end, you had to be faster than 17.839 to earn a second run at Ponoka.

Among the six who made it Sunday was local favorite Kim Gerwatoski, running a 17.694 on her seven-year-old horse, Elvis.

“He likes to go really, really fast to the first barrel. So I usually have to steady him and try to get his head down so he can see where he’s going,” explained Gerwatoski. “Our first (barrel) felt really good. On third, he has a tendency to look around. I was yelling at him and hoping he’d pay attention enough. I think we lost a bit of time there, but he did pretty good. It’s his first time here.”

The home-trained horse was both a Futurity and Derby champion, and she and her husband Deven, a tie-down roper, will be heading south of the line to rodeo after Ponoka.

Despite living in the area, Gerwatoski denies having any home-town arena advantage.

“No, not with a seven-year-old,” she laughs, while confessing it is nice to do good in front of friends and family here. But that shouldn’t amp the pressure factor come the Finals.

“Every run is the same to me. It doesn’t matter if it’s for big money or a jackpot, I try to do my job.”

It was a world championship tussle in the tie-down roping, where Tyson Durfey managed to wrangle away the top gun position from Shane Hanchey, when he put together two runs in 17.3 seconds Sunday.

Durfey, who now makes Texas home, was happy to turn around a cold spell he’d been experiencing.

“It’s been a long time since I’ve won a cheque, about fifty days,” commented Durfey. “I was just so excited when I placed in the first round! Now I’m super excited to be back in the short go at Ponoka.”

Durfey describes them both as businessman runs, aiming to be smart and consistent rather than for speed. He borrowed horsepower from Ty Harris, who didn’t qualify and was leaving, so Durfey was busy making arrangements to ensure he had a mount for the Finals.

“Canada’s like my second home. I spent a few hours with Al Bouchard today. I don’t get to see him very often anymore and we’re best friends, and we talked about roping, and life and kids. It just puts me in a good frame of mind being back, being able to win and be successful. If somebody wants to rodeo, this is a good place to do it.”

The visit must have been good for Bouchard as well, since he finished right behind Durfey, capturing two calves in 17.8 seconds to finish second in the ‘long round’.

The bull riding was chock full of great rides in the Sunday sunshine, but no one was more pumped than Coy Robbins from up the road in Camrose. The talented cowboy, who turned 20 last week, combined with the Outlaw bull Panda Haus for a whopping 89.75 points, to emerge the long-go winner.
Robbins is on the comeback trail after spending a year out of action after shoulder surgery.

“I was putting a lot of pressure on myself, thinking I was a step behind,” said Robbins. “But in my head, I should be thinking I’m a step ahead. I’ve been out for a year, I’m hungry as ever, and I spent a lot of money last year, so I need to recoup that!”

“I was so excited. I put on a good bull ride in Airdrie, so got the confidence and the ball rolling there. I mean, this is the Ponoka Stampede. This is what I’ve wanted to ride at for my whole life. I’m just happy to be here and back doing what I love.”

While his ride was phenomenal, Robbins admits his get-off technique needs some work, needing a rescue from the bullfighters.

“I got thrown underneath him and I was starting to panic, I couldn’t get out. Good thing they don’t mark you on the dismount!”

Wyoming cowboy Brody Cress secured himself a spot in the Finals for saddle bronc riding, but it took him a little extra effort. He marked 84.5 on a horse called Candy Alice.

“That second horse I’ve never seen, but she was good. She made me work for it a bit at the start where she was having those lead changes, but after that it felt awesome,” said Cress.

“I mean you’ve got to have those horses that will test you a little bit to be able to get back at a rodeo this big, where you’ve got to be some points.”
Zeke Thurston finished on top for the long round in the saddle bronc riding, with his 89 mark.

It was the best of days and worst of days for steer wrestler Harley Cole. The Okotoks hand had the fast run of the afternoon in 5.6 seconds, but it was a costly one, as he tore a bicep in the run. His total time of 12.0 seconds was fourth best and he’d earned a Finals qualification, but he had to withdraw due to the injury. That enabled defending Ponoka champion Scott Guenthner, who was in the crying hole with 16.7 seconds, to fill Cole’s spot and compete Monday. Tanner Brunner remains the fast man heading into Monday with his 11.3.

“It seems like anytime you come to Canada, the horses are so good and they’re so even that it makes it a spurring contest and that’s what I think is fun about coming up here,” noted Breuer.

It took a high 84.25 points to make it back in the event this year, and since there were two of those, it went to a tie-breaker. Ky Marshall had earned a single point more on his spur ride than Orin Larsen, so he makes the Finals and Larsen didn’t. Spur Lacasse finished the round in first with his 88.25.
Young guns Joey Romeo II of Nanton and Riley Roy of Strathmore turned some heads with a 5.3 second team roping run, giving them second place in the performance round. The only team to advance to the Finals Sunday included Wyatt Eirikson of Okotoks and Logan Spady of Alliance, with a 14.7 second total for 7th overall. Top spot went to Erich Rogers and Paden Bray for their 11.5.