More than 3.7 million dollars available to win at the Canadian Rodeos 

First go-round run will be in the slack, each morning.

Rodeo in the North!

With more than $3.7 million dollars in rodeo prize money available, don’t miss out on your shot at the purse, or the championship opportunities, in Canada.

It’s a simple process to expand your pro rodeo horizon, and most of it can be done right from your phone.

You need a CPRA membership card to be eligible to compete at Canadian rodeos. Just head to the www.rodeocanada.com, and click on the Members box at the top. There you’ll find member application forms to download, to get signed and witnessed.

Then you can email the form back to the CPRA office.

The cost of your CPRA card is just $405.23 for a non-resident. Remember, if you’re working in American dollars, that could be in the range of just $320 dollars, depending on the exchange rate. The Canadian dollar has been worth around 80 cents U.S. for most of 2017 and the start of 2018.

To be eligible for the Canadian Finals Rodeo, to be held in Red Deer October 30-November 4, 2018, you must participate in at least 15 CPRA/PRCA approved rodeos. The minimum is 18 for barrel racers. A maximum of five non-residents can make up the 12 qualifiers in each event for the CFR.

New this year is a Google calendar you can download on your phone, to help remind you of entry dates and details on each Canadian rodeo event.

You do need to have your card purchased at least two days before an entry opening date to a rodeo you’d like to compete at. But why wait? Getting your card early in the season means you can take in some Canadian spring rodeos that happen during a less busy time on the PRCA calendar. Then there’s not a late season scramble for your minimum count when you’re in the hunt for a CFR qualifying spot!

There’s more to rodeo in Canada than scenic mountains, cooler temperatures, and Tim Horton’s coffee. There’s also cash, and plenty of it.

More than 3.7 million dollars, to be specific. With that kind of prize money available on the Canadian rodeo trail, more contestants from south of the 49th parallel are discovering the benefits of heading north. Take Jason Thomas, for example.

“I enjoy it up here,” said Thomas, a steer wrestler at his first ever Canadian Finals Rodeo in November.

He’s journeyed all the way from his home region of Benton, Arkansas for several years now, but a 2017 victory at the Ponoka Stampede paved the way for his tour to include a winter trip to Edmonton with his bulldogging team, where he also claimed the Canadian steer wrestling championship. Thomas’ take was over $59,000 from Canadian rodeos alone.

“I enjoy going to Ponoka, and staying up here. I’ve made a lot of friends and I just enjoy coming to Canada. It helps with the road to the NFR, if you can do good up here.”

Then there’s bull rider Garrett Smith, who also won Ponoka. He finished the 2017 Canadian rodeo year as the season leader, and parlayed that into a Canadian bull riding championship at Edmonton. 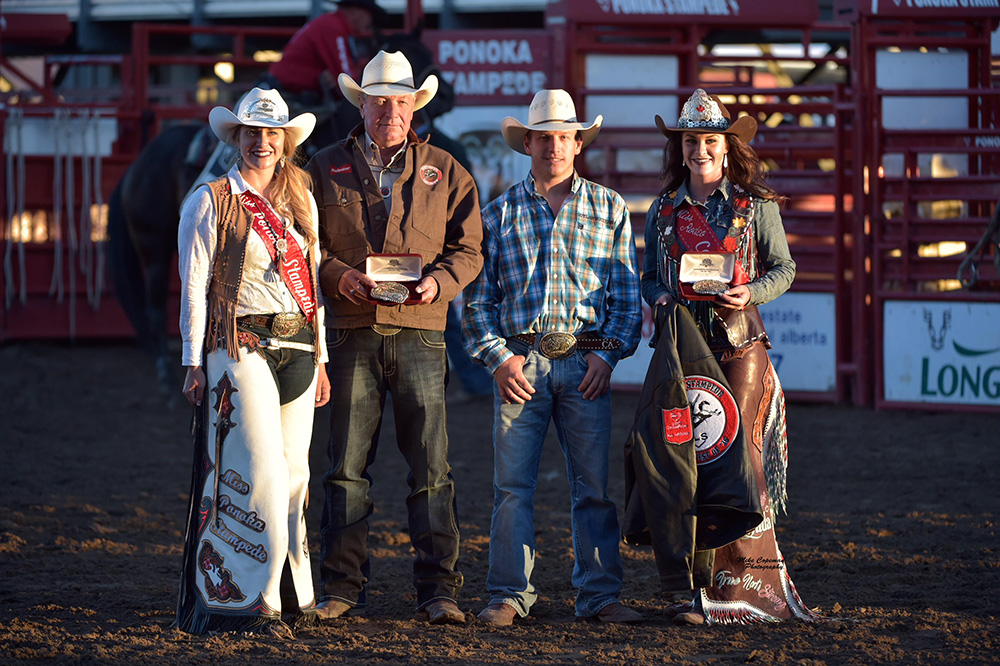 “I love coming up here to rodeos,” commented the competitor from Utah. “This was my first year rodeoing hard up here, so to get this done is pretty awesome.”

Garrett’s earnings topped $70,000 for his time in Canada.

“There’s a lot of good rodeos up here, a lot of great stock,” explained Hardwick, after his big week in Edmonton. “I like coming up here and getting on good bucking horses. It’s a great place to rodeo.”

Texan Blane Cox, at his first CFR last November, saw a lot of Canada in 2017, getting to 18 Canadian Rodeos, as well as his first Canadian Finals.

“It was on my bucket list,” remarked Cox, a tie-down roper. “Last year I made the Wrangler National Finals in Las Vegas, and I always wanted to make the CFR also, so I can scratch this one off the bucket list.”

Like so many others, Cox points out a real plus is the friends he’s made in Canada. Not to mention his more than $47,000 cash haul.

“I really enjoy it up here,” he grinned. “You get on the buckers right before Vegas, and it’s a great atmosphere, laid back. There’s great big strong horses that I like, and lots of money, so its my type of place!”

Another regular in Canadian rodeo is North Dakota’s Dusty Hausauer, the Canadian Saddle Bronc Champion in 2008, who rode at his fifth CFR in November.

“I’m glad to be here. You can win so much money up here. Until you have a 9-5 job, you don’t appreciate it. Now I’m a little bit older, I really appreciate how much money as a guy can win at events like this.”

“I tell you what – Canada has always been awesome to me. You come up here around this atmosphere, and with the hospitality and the great bucking horses, you can’t beat it.”

But it’s not only the Americans who realizes how important Canadian rodeo cash can be. Canadian Champion Saddle Bronc rider Layton Green had a record setting year for earnings in Canada, and the $78,000 he earned at regular season rodeos in his ‘home and native land’ went a long way towards getting him to Las Vegas in 2017, for his very first appearance at the National Finals Rodeo. So the returns are definitely there for the small investment in a Canadian pro rodeo card. Adventure, good bucking stock, and lots of money – it’s all on the Canadian rodeo table. Just know if you let the opportunity pass you by, those who already have discovered the benefits will be happy to collect instead.