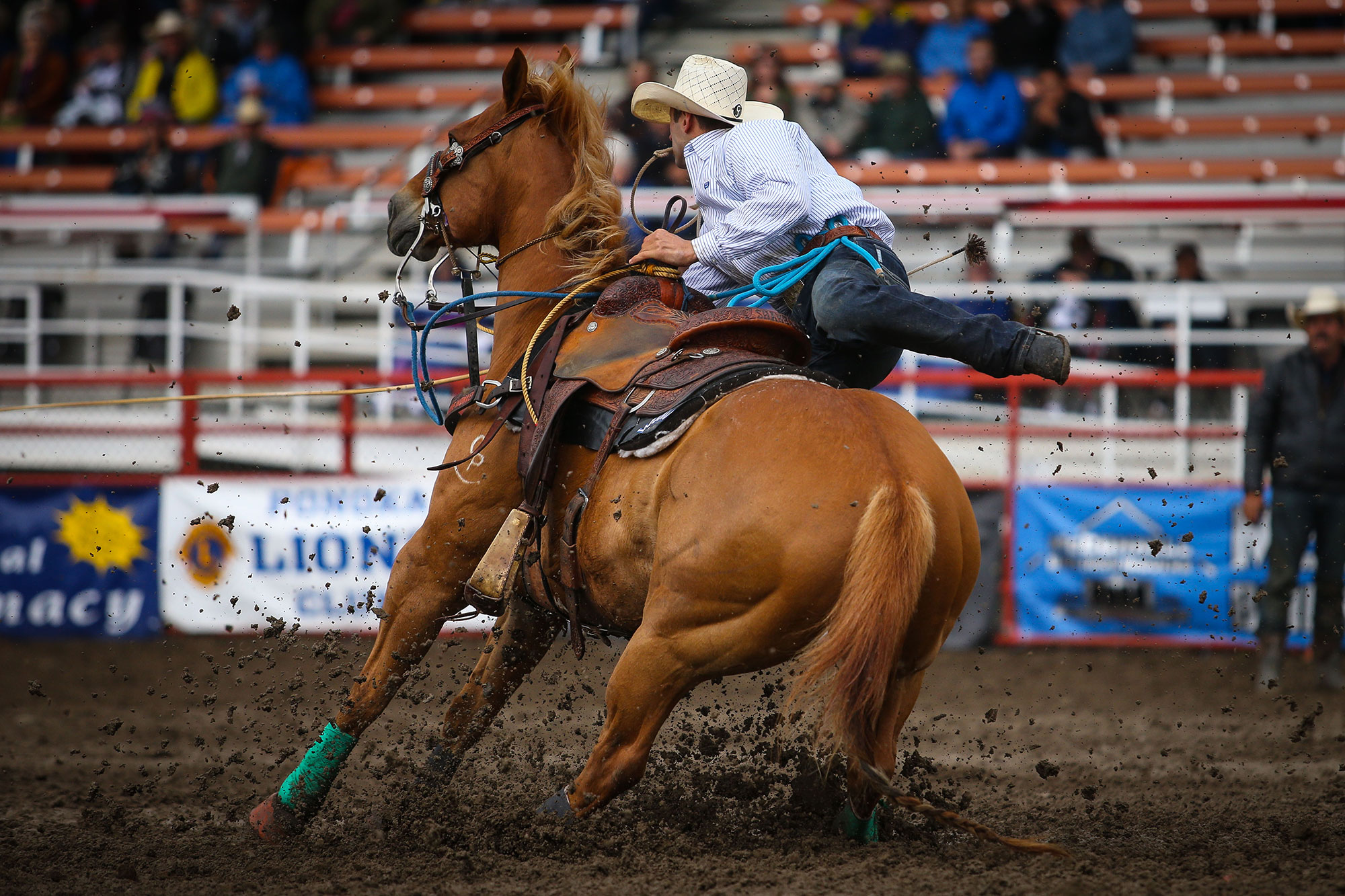 Payback can be sweet. Just ask Jacob Gardner. The Dawson Creek, BC cowboy had an appointment in Ponoka he wasn’t about to miss.

Why was he so anxious for a mere eight seconds with a one-horned, nasty yellow beast by the name of Devour?
“I got on that bull last year in Elnora,” explained Gardner. “He bucked really hard and injured me pretty bad. I was out a while. So I’ve definitely had his number ever since, and I’ve been waiting to draw him. I couldn’t have asked for a better place to get back at him.”

Gardner made every second and every jump count, even getting in a few spur licks for good measure. The judges were impressed and rewarded the performance with 88.75 points, to shoot Gardner to the bull riding lead at the Ponoka Stampede.
“I took my time (coming back). With concussions, you’ve got to take them seriously, so I did and it worked out. But I definitely hadn’t forgotten. When I saw my name next to him (in the draw) I knew if I just stayed focused, calm and cool, and did my job, it would come together. So I was pretty excited, but nervous at the same time.”

“There’s no better feeling than spurring,” said Gardner. “I was pretty happy to get a little bit of revenge on that bull.”
There’s more in this cowboy’s rigging bag than just a bull rope. He’s also a steer wrestler, and wears the buckle of Canada’s All-Around champion this year. He did wrestle a steer in the mud half an hour before his bull ride, and his 7.4 second run there is placing in the go-round so far.

“This year, I’m focusing a lot on my bull riding. I want to do better at that. But I’m entering here and there in the steer wrestling. It’s coming. I’ve got some work to improve on, but I’ve just got to keep entering and going at ‘em and eventually I know it’ll come together.”

Gardner came up empty on his steer in the morning, so he won’t be making the Finals in two events, but he is excited to be leading the charge back for his first bull riding qualification ever at the Ponoka Stampede.

Another Canadian Champion has risen to the top in the tie-down roping, as Shane Hanchey takes over the number one position. He put together a 9.1 and 8.8 second combination for a pace-changing 17.1 second total on two runs.

“I had the calf I wanted,” admitted the Louisiana looper, who pointed out the afternoon conditions were quite a bit muddier than the morning slack run.

“That made me breathe a lot easier. It’s funny because you want one that kind of waits on you but what’s tricky about slower calves is this head start. You’ve got to judge that thing just right.”

“It worked out. I kind of missed picking up my string, maybe it wasn’t where I thought it was going to be with that mud. It was just a minor error, but you know calf ropers. We tend to point those things out. I could’ve been 8.5. It’s easy to say that now,” smiled Hanchey.

For the first time, Hanchey was using his horse Bam Bam at Ponoka, and he was pleased with how the horse handled the challenges, and how he did too.

“You’ve already got a lot going on here with this long head start, and then they throw some weather at you, and it really makes you scratch your head. I hadn’t won anything at five rodeos. What I told myself was ‘you’re a gamer. If you’re a gamer, you’ve got to win at Ponoka, at the big ones’. So this makes me feel good.”

The leaderboard didn’t have any other adjustments at the top end after the third performance of the Stampede, but there were contestants who took care of business by putting themselves in Finals position. Jesse Pope of Missouri had the top-marked bareback ride of the day for his 84.5 point ride on Vold’s Sheer Ice. Spur Lacasse stays first with his 88.25. The top mark in saddle bronc riding was an 83 from Lane Cust of Ardmore on Pedro, with Chase Brooks holding on to first with his 86.5. Washington steer wrestler Taylor Gregg had the cleanest run of the muddy performance at 6.3 seconds, and slid into seventh overall with 24.2 on two runs. Hunter Cure is still the pacesetter with his 13.0 second total. Grady Branden of Barrhead and Colton Fletcher of Wainwright clicked for two team roping runs in 21.7 seconds, still good enough for seventh behind leaders Erich Rogers and Paden Bray and their 11.5 second tally.

“That’s part of rodeo,” sighed Hillman, also a Texas cowgirl. “My horse normally likes the mud and rain, so we just let that leave our minds. He had a little trouble on the second (barrel) with the footing but we did the best we could with the conditions. It’s always fun to run in the mud.”

“We like Ponoka. We love coming to this rodeo, and the people here.”